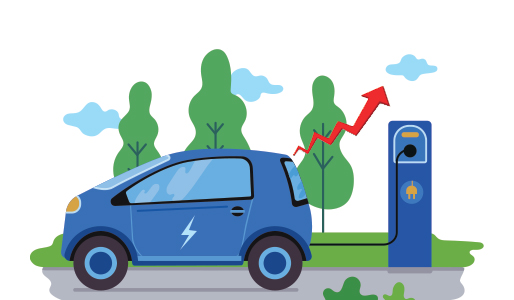 The Government is making considerable efforts to strengthen EV charging infrastructure by installing DC fast chargers on highways and fuel stations. But the problem area remains slow charging by AC chargers, which is recommended by EV manufacturers. For those living in high-rise apartments and housing societies in particular, it is an acute problem. The solution lies in EVCD, a charging dispenser that can be installed at the parking slot of the user.

Electric Vehicles (EVs) have gained popularity in the country, particularly during the past few years. While the Government has done a commendable job in spreading awareness about the benefits of EVs over petrol and diesel-run vehicles, the multiple subsidies and tax benefits offered by it have also encouraged people to make a switchover.

With the number of EVs getting sold constantly on the rise, the need for having a decent EV charging infrastructure has also become paramount. The Government, on its part, is in the process of installing DC fast chargers on highways to take care of the range anxiety of EV users. It also has plans to install DC fast chargers at all the 69,000 fuel stations across the country.

Even though the installation of DC chargers is being taken care of, there is an utmost requirement of building AC slow-charging infrastructure. Although slow, the AC chargers not only charge the battery pack at a steady pace, they also keeps it safe. The maximum utilisation and convenience of EV charging is during the night time. Even automobile manufacturers recommend charging of EVs through AC chargers and advise the use of DC chargers only in case of an emergency.

While consumers living in stand-alone houses or villas face no issue in charging their EVs, those living in high-rise apartments have multiple problems to encounter, from the builders or the RWAs. As many builders and RWAs provide EV charging infrastructure in the common area, the  burden of EV charging falls on all the residents, even those who don’t own an EV; and that becomes an unethical practice. And the builders can’t even force the EV users to go for DC chargers, which have high tariff rates.

The solution to all these problems lies in Electric Vehicle Charging Dock (EVCD), an EV-charging dispenser which can be installed in the individual parking slot of an EV-user and can be used to charge the vehicle by an AC slow charger. The EVCD tracks and calculates the units consumed while charging an EV and deducts the amount from the EV owner’s e-wallet on a mobile app. It is a transparent system for both EV charging and revenue realisation for the builders and users alike.